The First & Second Weeks of December

On Monday December 3rd several residents went for a walk in the community. Upon returning to the Court many enjoyed a bowl of Ferne's homemade corn chowder. Yummy! A terrific treat on a cold wet day.

On Tuesday December 4th a few residents went to Empire Theatres at Dartmouth Crossing to "the movies". This writer and one other resident went to see "Life of Pi" (in RealD 3-D) An excellent film by all accounts.

On Monday December 10th residents gathered in the office for a festive "Holiday Bingo" game. Prizes were won, and much fun was to be had as individuals tried to complete "BINGO" before the rest.

Tuesday December 11th we had another visit with Jamila. This is a weekly 'tradition' now, and residents look forward to her visit as much as Jamila looks forward to having all that attention lavished upon her.

Wednesday December 12th several residents of the Court walked to Chapters and Starbucks for an outing.

The Third & FourthWeeks of November 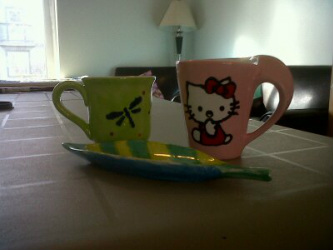 On Monday November 19th a few residents went to the Clay Cafe in Halifax where various items were created, including mugs and incense burners. (see photo)

On Tuesday November 20th we had another visit with Jamila, Ferne's delightful black Lab.

On Tuesday November 27th, we enjoyed a visit with the dog, Jamila once again.

On Wednesday November 28th several residents of the Court met in the office to make a variety of holiday crafts.

The Second Week of November

On Monday, November 12th, residents  of the Court enjoyed a lively game of Bingo in the office, with Ferne doing a great job of calling the numbers.  Prizes were won, and a good time was had by all. Later in the afternoon we made pizzas. Using Naan or Pita bread as a crust residents had their choice of toppings: pizza sauce, pepperoni, mushrooms, green peppers, onions, tomatoes and mozzarella cheese.
.

On Tuesday, November 13th, Ferne brought her dog, Jamila, a black Lab mix, to visit with the residents. Friendly, and obedient, Jamila's happy disposition is contagious. I'm not sure who enjoys her visits more, Jamila or the residents of The Court.


On Wedensday, November 14th, Ferne and a couple of residents walked in the rain to Tim Horton's where we enjoyed a beverage,  doughnut, and conversation, before making our way back to The Court.

The first full week of November 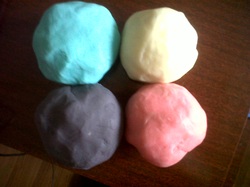 On November 5th a group of residents took a morning walk through the neighbourhood. Walking to Albro Lake, we 'checked out' the outdoor exercise equipment, before taking a more meandering way back home. Once back at "The Court" residents enjoyed a bowl of hot Hamburger & Vegetable soup, prepared by Ferne!

On Tuesday, November 6th, a small group of residents went to Empire Theatres for a fun-filled evening of movies. We split up at the theatre after loading up with popcorn and soft drinks. One of the group went to see "Fun Size" while the rest of us enjoyed "Flight" with Denzel Washington. Everyone agreed that it was a good time, and all enjoyed their viewing experience!


On Wednesday, November 7th, residents were invited to make playdough in the office.  Using an easy recipe that anyone can make at home, several different colours were created and shared.

Cook over medium heat, stirring continuously until the mixture thickens and starts to pull away from the sides of the pan. Dump out on a flat surface and knead until soft and pliable. Store in an airtight container. We used zip lock bags and a week and a half later mine is still as soft and pliable as it was when it was newly made.

Note: Colours will darken slightly over time, and the 'white' (no food colour) becomes more of a creamy tone. If left out the play-dough will harden. 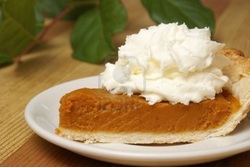 On October 31st, 2012 an impromptu Hallowe'en party was held in the office.

As party goers came and went we enjoyed visiting with one another, carving pumpkins (see the photos section), and enjoying a slice of delicious pumpkin pie with whipped cream!

A big thanks to our office staffer for arranging the party activities and refreshments!

A group from Adsum Court went whale watching with Murphy's on the Water on 14 August 2012.

We took the bus from The Court to Alderney Landing where we enjoyed a wonderful al fresco meal of KFC chicken & chips with bottled water in the park overlooking The Harbour. We then travelled across the harbour via ferry and walked along the waterfront from the Halifax Ferry Terminal to the dock where we would board the boat for the tour.

The boat was quite nice with an open-air upper deck and enclosed lower deck. There was a guide who spoke of the various sites along the shoreline as we moved through the harbour. Unfortunately it was difficult to hear her at times.

Although no whales were sighted, we did see a pod of dolphins frolicking in the waves. A treat for some of the group was to see a live lobster 'up close'  as the tour operators checked several live-traps. The lobsters in those traps were for scientific and educational purposes only, and not for dinner! (Drats!)  We also saw a wide variety of sea birds including gannets, cormorants, and of course no shortage of herring gulls.

Some of the tour group got to 'feed the gulls' by tossing bits of bread into the air from the stern of the boat. Many were amazed at how the gulls would grab these treats right out of the air!

Returning to the dock at last, we made our way back across the harbour via ferry, then bused back to The Court, tired, but happy!


A few photos have been added to the photos section.
This site is created and maintained by Adsum Court resident, Mary M.